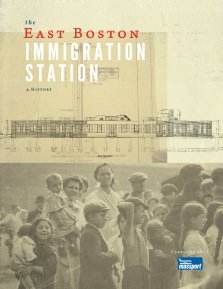 The East Boston Immigration Station opened in April of 1920, and was used for 34 years as a detention center to hold immigrants whose papers were not in order or were thought to have a communicable disease.  Most of the immigrants detained at the facility were allowed to enter the United States. It is estimated that approximately 10 percent of the nearly 231,000 immigrants who landed in the Port of Boston from 1920 to 1954 were processed through the facility.

Located at 287 Marginal Street, the building had harbor access to assist in processing immigrants who failed to clear on-board ship inspections when they arrived in the Port of Boston. The site is now part of the East Boston Shipyard and Marina.

Originally built as a one-story building, partial second and third stories were added in 1929 and 1930. The structure contained detention facilities, men’s and women’s dormitories, recreation and dining rooms for detainees, baggage storage, offices and examination rooms for the Public Health Service, a rooftop exercise area, and offices and processing facilities for Immigration officials.

In June 2012, the Massachusetts Port Authority erected a series of interpretive panels giving an overview of immigration with an emphasis on immigrants who entered the United States through the Port of Boston. These panels are on display at the Navy Fuel Pier and Piers Park in East Boston.