The Sumner Tunnel, one of two tunnels from Logan to Boston, will be closed weekends from 11pm Fridays to 5am Mondays while MassDOT completes restoration work, excluding holidays. Allow extra time to get to and from the airport. For more information on the project and detours, please visit MassDOT. For information on ways to get to Boston Logan, click here.

Strategically located across the Boston Metropolitan Area, there are 35 listening stations that gather data which Massport uses to minimize the noise that Logan Airport brings to the community. Each day readings are taken from sensitive noise monitors that are able to sort out the sound of a passing plane thousands of feet overhead from the routine din of neighborhood traffic a few feet down below.

The results of these readings help Massport monitor flight tracks, respond to community complaints, better understand how Logan impacts communities day to day and to participate more effectively every year in the revision of Logan's noise contours, by verifying the accuracy of the FAA's computer generated Integrated Noise Model (INM). The INM is used to determine eligibility for government-supported soundproofing.

The FAA uses an Integrated Noise Model to compute sound level noise contours around the airport. The contours are annual measures for day and night and define the sound impacts of Logan Airport on particular communities. They are used for planning and mitigation purposes, and to determine eligibility for soundproofing. Ongoing monitoring conducted by Massport is used to check the accuracy of these computer generated models. Over the years, Massport has worked proactively with the FAA to make the INM better "fit" Logan. For example, the INM has been adjusted, with FAA Noise Monitor to reflect topography unique to Logan: terrain and water. These adjustments have allowed Massport to expand the eligibility for soundproofing. The terrain adjustment alone has made more than 500 additional dwelling units eligible for federal soundproofing.

Annual noise of 65 DNL or greater is a level the FAA has established as incompatible with residential communities. Massport has been tracking the number of people within the 65 DNL contour since 1987. In 1987, it was estimated that the total number of people exposed to more than the annualized 65 DNL was about 67,000. Reflecting the adoption of new engine technology and the reduction of the overall number of flights at Logan, the population exposed to levels of noise in excess of 65 DNL decreased to 17,181 in 2000 and to 3,947 in 2011, this is over a 90% decrease from 1987 to 2011.

Over the years, Massport has made major gains in minimizing noise. Through nighttime restrictions on operations, noise abatement departure turns and other local mitigation measures have dramatically decreased the exposure in the communities that surround Logan Airport. 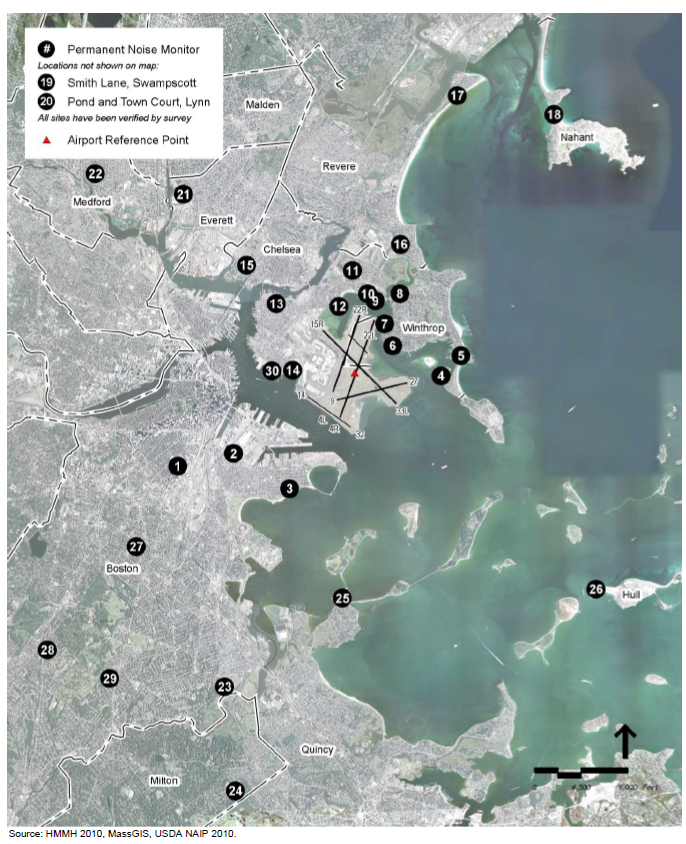