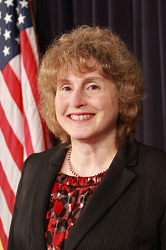 Stephanie Pollack serves as Secretary of Transportation and CEO of MassDOT having been appointed by Governor Baker in 2015.

Prior to her appointment, she worked on transportation policy, finance and equity as Associate Director for Research at the Kitty and Michael Dukakis Center for Urban and Regional Policy at Northeastern University since 2005, where she has also served as an adjunct professor sharing her skills and experience with the next generation of public policy leaders.